It's not ranting if somebody asked you.

Okay, first, Elmore Leonard on said.  I agree.  In spades.  In the bucket of biggest available backhoe.  With exceptions.  I wouldn't turn to see if the ghost of Henry Fowler was creeping up behind my desk-chair if I wrote shouted, whispered, called back up the cliff towards where she was waiting, asked or answered for example.  But said is best and order a bigger backhoe for how much I agree about modifying it with adverbs.  Except for crisply.  I just love this, although I never wrote it myself when it was available.  (It's copyrighted now for Julian Fellowes to use in Violet, the Dowager Countess of Grantham's stage directions (since it's how she says everything.))

Now for my personal top three unbreakable rules.  I apologise in advance for seething.

3.  sneaky attributive adjectives bundled in to wreck orderly action sentences instead of rolling up their sleeves, going predicative and getting clauses or even sentences of their own.  For example:
Wait!  Don't click away and tell yourself you'll avoid non-Alan-Orloff Thursdays from now on.  I know that sentence is now a multi-vehicle pile-up of awfulness.  That's the point.  Who cares about her hair at this moment and who (except house buyers and realtors) ever care hardwood floors?  That's why permed, highlighted, hardwood and polished can't have their own clauses and that's why they shouldn't try to sneak in elsewhere.


2.  This is about description too.  No exceptions, no contextual considerations, just no.  Never - never - have a character look at themselves in a mirror early on in the first chapter and describe their looks.  Don't.  When was the last time you looked in a mirror and thought to yourself that your eyes were brown and your nose was small and straight?  Don't ever.  If someone you knew sighed in exasperation at that annoyingly wayward curl and tucked it behind her ear with a rueful grin, wouldn't you want to punch her in the neck?  Just don't.


1. This is my tip-top of all time writing no-no (and the reason I used Fowler instead of Strunk and White earlier).  It's rude, it's wrong, it's stupid, it's generic he.  It's the daft idea that you can use he, him and his to talk about all of humanity: e.g. Man breastfeeds his young.  Strunk and White reckoned he or she is clumsy, singular they is illiterate and so generic he is the only choice left and, besides, only silly-billies will complain.

Well, call me demanding, but I'll take my writing advice from someone who's not flummoxed by an evolving pronoun system.  See, the silliest, most ignorant thing about saying number agreement trumps gender agreement . . . is that number agreement has shifted once before and the sky didn't fall.    You used to be plural; the singular was thou.  You was also more polite; thou was more intimate.  Politeness won.  You became singular/plural and thou dropped out of use.

I can just imagine the mediaeval grammar mavens reaching for the smelling salts.  Woah!  Changes in the pronoun system! Number distinction lost!  You-ing social inferiors instead of thou-ing them!  Will English survive?  It will.  It did.  And it will again.  Anyway, we've got y'all, youse and y'guys coming along to do some of the plural grunt work again.  (I wonder if Strunk and White would have welcomed them.)

Kisses and cocktails and a little light jazz.

How much sex and violence do I weave in?  Are you accusing me of writing crafting cozies?  I couldn't weave with a gun to my head.  Or crochet.  Or knit.  I've often said that the greatest technological leap in the evolution of modern humans happened the day someone looked at a sheep -a sheep! - and said "I've had a brilliant idea.  Why don't we . . ." 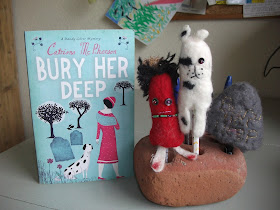 Okay, enough willful misunderstanding of the question.  Honestly?  When it comes to the Dandy Gilver mysteries, very little.  These are my hommage to the golden age and I don't put anything in them that you wouldn't have been found in Dorothy L Sayers, Margery Allingham or Josephine Tey (although I'm not sure I ever have managed a tone as dark, bleak and just plain nasty as some of Allingham's - how these ever got the cozy title, I'll never know).

So, it's an extra constriction, to be sure, along with the requirement for an early murder, a late solution, and some red herrings, but if we minded constriction we would hardly be writing in this genre, would we?  The compensation for me in the Dandy stories is that no one has a mobile phone, there is no forensics and I never have to write one of those desk-bound google scenes.  When Dandy Gilver and her sidekick Alec Osborne dig for background they do it in dusty church vestries or the mahogany-lined offices of shipping agents or what have you, with scope for all manner of Dickensian walk-ons.

But now I've started writing modern stand-alone suspense too.  In the first one, As She Left It the story didn't throw up much in the way of either graphic sex or explicit violence.  It was a relief not to have to keep checking the vocabulary in the Shorter Oxford for anachronisms, mind you, and I may have gone slightly F-tastic with the curses just because, for once, there was nothing stopping me.
In the new one (working title The Day She Died) the story does involve sex and violence and I've followed the characters into the bedroom and out again as well as watching the bones shatter and the blood drip from quite close-up too.  It's still being edited.  Maybe some of the squelching (sexual and violent) will end up on the cutting room floor.  If so, it'll be because, as Chris said yesterday, the story is better without it.  We'll see.