Perhaps not.  Writing a series of detective stories about an amateur sleuth in the 1920s keeps me well away from the bit of the genre where we all start to wonder where it's going to end.  The tone would be a joke; worse than a sado-masochism series by an an author who couldn't use plain terms for genitals.  No, wait!  Bad example.  But you know what I mean.

Which is not to say I've never had complaints.  There was one time when someone at a reading said - in very schoolmarmish tones - that she hoped I wasn't going to be poking fun at religion again.  AGAIN?  It turns out she didn't like the line in Bury Her Deep (DG3) where I said "The Church of Scotland gets by on a little doctrine and a lot of scones."  I persuaded her that it was affectionately meant and we parted friends.

I imagine that most people's threshold is set a wee bit higher than that, but we've all got one.  I wouldn't have a problem with serial killers if the muse ever dragged me that way; they're so vanishingly rare in real life and so effulgently ubiquitous in fiction that (to me) they've become almost as cartoonish as zombies and vampires.

But if the muse started whispering a tale of serial rape in my ear I'd sing "La-la-la can't hear you" until she shut up again.  Partly that's because serial rapists are not rare and their victims are all around us.  Hence my trigger warning.  And likewise paedophila.  Empathy for survivors who might be kicked back to their worst moments by my writing would always stop me dead: there's a world of difference between being "offended" and being hurt.

Serious stuff.  So to finish, I'm sharing a video (click here) that always makes me laugh: three people, extremely offended.  Or as they would have it . . .
Catriona McPherson at 12:30 AM 3 comments:
Share

Kidding.  Just because I've never written a short doesn't mean I've never come up with plots that would be perfect for them.  But when I do, I call the idea a sub-plot and lay it aside until another one comes along that complements it.  Then both of them are set aside until a third spark ignites and maybe a fourth.  Then there's a big sprawling complicated cast of thousands novel ready to go.

The master of this kind of of labyrinthine plotting in the mystery genre is Kate Atkinson (if you haven't read Case Histories and its three sequels you're in for a treat and three more treats to follow).

I'm no Kate Atkinson, but my June release, As She Left It, is the result of years of sub-plot collection.

On summer holiday in France in the mid-90s, driving to the boulangerie one morning, I had an idea about an elderly jazz trumpeter with pneumonia who needs a stand-in.  This character  - Fishbo Gordon - is in the book.  In my head, in fact, the story was called "Fishbo's Puffer" for years.

Then in about 2005 I saw a magnificent bed in an antique shop in Castle Douglas and bought it: 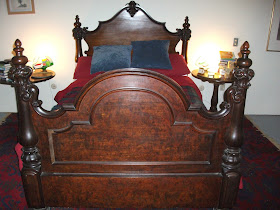 It was a bed with a puzzle, a puzzle which - refracted through the mind of a mystery writer - became a secret, a secret which became another sub-plot in what was now a third of a novel.

A year later, in Leeds, on an all-girls weekend, two friends and I met a little old lady wandering around in the street (and wandering around in a gently mythical version of reality too), took her home and contacted her carers.  It was a tiny incident and would have made an effective short story but I don't write short stories.  So this little old lady joined the jazz trumpeter and the bed-with-a-secret and the book was halfway to being afloat.

That weekend gave me the setting too; As She Left It is set in a short dead-end street of old red-brick houses in Leeds; in my friend Diane Nelson's house, in fact, where we were staying that weekend.  The wonderful design department at Midnight Ink captured the mood of the story perfectly with this jacket: 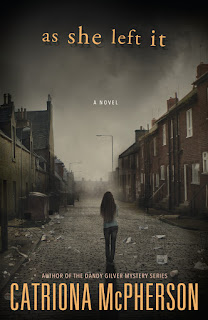 but I promised Diane that I'd show the real street too - much less gothic and grim. 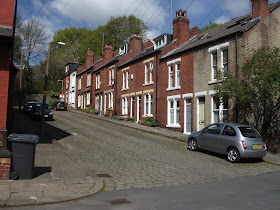 In 2009, I was writing Dandy Gilver and not thinking about Fishbo at all, but one day in Tesco, watching the online shoppers filling trolleys with groceries for strangers, I got to thinking about how much you could tell about someone's life if you did their shopping and how those shoppers must live somewhere local and I wondered if they did their neighbours' shopping for them and what if they worked out that their neighbours were . . .

Another short-story-sized plotlet that was modern and dark went into the cauldron and now my protagonist had a job as well as a house and I had four linked tales to tell.  It was time to start writing and I felt more than usually sure that I knew where this one was going

Imagine my surprise when, a little way into the first draft, the red bricks of that dead-end street started whispering a completely new story in my ear.  It turns out, after years of preparation, that the main plot of As She Left It is none of the above.  But the bed, the trumpeter, the little old lady and the neighbour's secret are all in there too and I've still never written a short story.