Following on from Clare's Bouchercon-inspired post yesterday, I'm going to share an "are you a writer" conversation I fell into at the bar.

So I was at the bar and, as anyone who attended Bouchercon will confirm, that left plenty of time for a long chat.  (2 barstaff, one on his first day (yes, really) and a whole lot of crimewriters and fans.)   A guy sitting on the nearest stool to where I was waving a 20 and pining for a club soda said the line.

Guy: "Are you a crimewriter?'
Me: "I am.  You?"
Guy: "Yup."  (Slight alarm bell in the distance, since he was wearing one of those 1930s Chicago- style caps, at a very jaunty angle, and was chewing a toothpick as if there was a teeny weeny little baton twirler practising in his mouth.  In other words, he looked a bit too cool to be one of us.  Like when Lou Diamond Phillips turned up at Left Coast Crime; even from the back you knew he wasn't a writer.)
Me: "What do you write?"
Guy: "Oh, I'm prolific.  What do you write?"
Me: "1920s amateur sleuth novels.  And a stand-alone."
Guy: "Novels?  Books?  Wow.  How many?"
Me: (thinks) "Eleven."
Guy: (whistles).  "Hot damn."
Me: "So . . . are you a short story writer. (Because why are novels so surprising?)
Guy: "Short, long, real long.  I do it all."
Me: "What's your name?"
Guy: "My real name or my pseudonym?"
Me: "Are you on a panel this weekend?  Because this witness protection programme stuff isn't going to fly."
Guy: "Okay, my name - and you better get ready for this - is Stephen King."
Me: "Oh. Yeah, well, good idea changing it.  Or even Steve King would do, so your mother could still be proud sort of idea."
Guy: "No, Stephen King is my nom de plume.  That white guy in Maine?  He's my assistant.  He does the travelling and I do the writing."
Me: "Uh-huh."
Guy: (turning to the man eating his burger and fries on the next stool along) "And this is my beautiful wife, Tabitha."
Me: (getting it finally) "Well, it's a great honour to meet you, Mr King.  I'm a  huge fan."
Guy: "I'm just messing with you.  I clean the windows in this place.  You really a Stephen King fan?"
Me: "A huge one.  All of them - the early stuff and the late stuff.  I loved Dumas Key."
Guy: "Oh, yeah!  LOVED Dumas Key.  Scared the bejesus out of me,  Dolls!"
Me: "Oh my God, yeah.  Dolls.  Dolls and creepy little dead kids scampering around."
Guy: "With the footprints?  Brrrr.  How about Lisey's Story?"

And then the time passed very pleasantly, looking forward to the Shining sequel and arguing about the Dark Tower and I learned that a. books are a universal language, b. my basic setting is "taking a basket of food through the woods to grandma's house" and c. window-cleaners are cooler looking than crimewriters.  At least in New York.

And then all of a sudden something exciting happened.

"Sorry, what was the question?" asked the crimewriter.  She'd been cooking, editing and preparing interview questions all at the same time all day and was a bit scattered.
"Which bits of writing come easy and which are tough?" asked the blog.
"Oh, okay.  Well, let me see now . . . dialogue never seems that hard.  You know, naturalistic sort of dialogue like people actually do?"
"As opposed to constructions which are too syntactically complex and contain overly formal vocabulary choices?'
"You betcha."
"What about description?'
"We've all stopped description for a month in tribute to Elmore Leonard, haven't we?"
But Elmore Leonard seemed a world away from this kitchen, with its flagged floor, its Aga, its cheerful jumble of cats, cushions and courgettes from the garden. 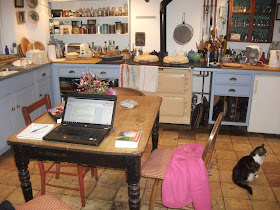 Outside there was some weather too: rain plotching down, so that the sweetpeas and honeysuckle which had waved in greeting when she arrived the day before were sodden, hanging from their string supports like swooning maidens on the jacket of a bonkbuster.
"I think it's okay as long as there's similes," said the blog.  "You know - Marlowe style."
"Coolio," said the crimewriter.

"And action?' the blog went on.  "Do you find action sequences easy?"
Suddenly three things happened all at once.  Maybe four.  Lightning flashed, the house was plunged into darkness, behind her there was the sound of glass shattering and the cat on her lap dropped to the floor and streaked away through the catflap, crouched low with its ears flat back.
She leapt to her feet, knocking over her chair, and backed away from the door.  Even in the darkness, she could see a humped shape and an arm reaching through the broken pane to scrabble at the handle.
Through her panic, she had time to realise that a flash of lightning shorting the electrics, just when an intruder was about to burst in, was a massive coincidence, but the cat was a nice touch.

"Don't come any closer," she said, the relief of returning to dialogue lending a steady and commanding air to her voice, although her pulse thrummed.
"Who's going to stop me?" The snarl in the voice turned her legs to jelly.

All day she had been boiling pork bones and herbs to make stock.  She had been planning to use it as a jelly layer around the inside of a raised-crust pork pie.  None of that mattered now.  She tossed her head, trying to shake out the recipe nonsense.  With the movement, her hand brushed against the measuring jug sitting ready for when the stock had cooled.  She seized it, dipped it, and threw 500mls of scalding hot liquid, drained but unsalted (she shook her head again), right into his gleaming eyes.

Just then the lights came back on, for reasons which will have to be determined in the second draft and she looked down into the ugly and now blistering features of A Very Bad Man.
"How about characterisation?" the blog asked quietly.
"Never mind that,' said the crimewriter.  "I still have enough stock left for my pie."