Of Monsters, Burglars and Zorro


As this is my last post here on the Criminal Minds site, I will exercise my parting prerogative and ignore the question posed to my fellow bloggers this week.  I offer instead a brief round-up of current topics that have intrigued me, and, one hopes, you dear reader as well for they relate to our thing -- writing and reading.

For instance, and this was a niche market I wasn’t familiar with, Amazon is now banning some but not all monster porn ebooks from its Kindle and site.  Who knew there was a cottage industry in steamy sexual encounters with mythical beasts such as satyrs and werewolves (the Twilight series notwithstanding), and other more, er, convoluted forms of pairings and cavorting in forests green?  A lot of this stuff is written by women and, I assume, consumed if that’s the right word, by women.  One such writer profiled in Business Insider, Virginia Wade, said that on a good month, her 12,000 word story netted 30 grand.

As this is a family site, I won’t repeat the title, but suffice it to say it’s in line with her others like Moan for Bigfoot.  Apparently some of her titles are still available on Amazon.  I suppose what with Bigfoot being able to talk so I guess it’s not exactly bestiality but cross-species coupling.  Click here for a hilarious, and G-rated video trailer excerpt Business Insider did from K. J. Burkhardt’s “Taken by the Monsters.” 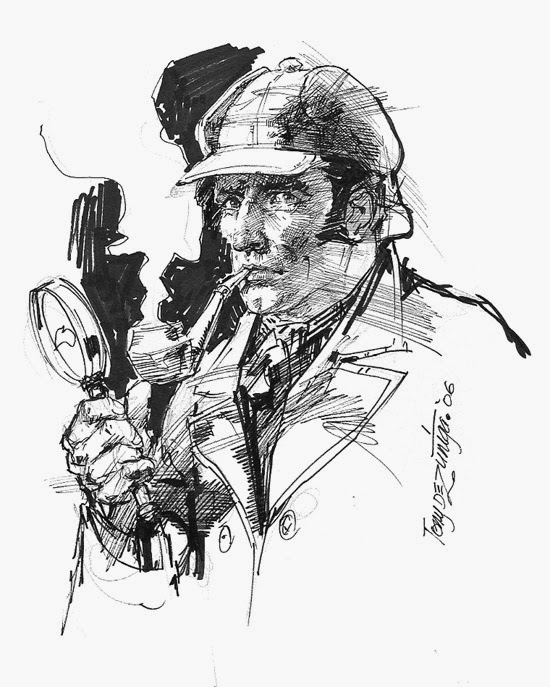 On another front entirely, I note that a chap I now, Les Klinger, has gotten the upper hand, at least for now, over his opponents.    Chief Justice Rubén Castillo of the United States District Court of the Northern District of Illinois, Eastern Division, in a declarative judgment stated that the 50 Sherlock Holmes stories Sir Author Conan Doyle wrote, including the characters and elements therein, prior to 1923 are in the public domain here in the United States.  The case arose when Les, the author of the definitive, Edgar winning New Annotated Sherlock Holmes was putting together an anthology of new Holmes stories written by today’s writers, In the Company of Sherlock Holmes.

Putting the book together, Les’ publisher, Pegasus Books, got a letter from the Conan Doyle Estate demanding a licensing fee.  When Les, an attorney and Holmesophile, balked and the publisher got cold feet, nixing the book deal, he went to work.  While this was a higher profile case, it should be noted various small presses have been using Holmes as a public domain character for many years though presumably these publishers flew below the radar of the Estate.  Doyle did write  17 more Holmes tales after 1923 and those are still considered under copyright here – though in Britain, all of the Holmes canon are in public domain.  The estate is appealing the ruling.

Lastly, March 8, 1971, while I was still in high school, that date is forever imprinted in my mind.  That was the date that after a forced exile of some three and a half years, the people’s champ Muhammad Ali was going to get his shot again after refusing induction to the armed forces on religious grounds.  His ban from boxing was overturned by the Supreme Court.  He was fighting Smokin’ Joe Frazier in Madison Garden.  Frank Sinatra and all the clebs were there, with Burt Lancaster doing color commentary.  This was before pay-for-view on TV, but you could go see the fight on closed circuit in movie theaters. I couldn’t afford a ticket but I listened on the radio.

Listening too were several anti-war, social change activists including cab driver Keith Forsyth, John and Bonnie Raines and the recently late William Davidon, the ringleader, a college physics professor.  They were in Philadelphia and figured the cops, along with millions of others, would be following the fight.  They were right.  The group had planned their heist for months and that momentous night, they broke into an FBI field office in the aptly-named Media, Pennsylvania.  Their goal was to use the FBI’s own paperwork to expose their dirty tricks.  They succeeded, bringing to light among several matters that the Bureau had conducted something called COINTELRO, a counter-intelligence program meant specifically to disrupt and destroy the civil rights (FBI director J. Edgar Hoover had a pathological hate for Martin Luther King, wanting to make sure King didn’t become and Black Messiah -- who he codenamed Zorro) and black power movements.

Betty Medsger, then a reporter at The Washington Post who was one of the ones the stolen papers were leaked to, has written a comprehensive book about all of this called The Burglary: The Discover of J. Edgar Hoover’s Secret FBI.  I guess what with all my free time now, I can’t wait to read the book.