I'm the wrong person to ask about day jobs because I've so rarely had a day job I either a. liked or b. was any good at.  For sure, I've never had a day job that c. was going to make my fortune.

I tried banking.  Hah.  Fifty-pound-notes got bundled into hundreds.  Which was four notes, right?  After they searched my bag and and my pockets and recounted my stash and looked down the back of the couch, a very honest wages clerk came back to the bank and returned the extra.

I tried being a university lecturer.  Hah.  I was one of four lonely linguists in an English literature department, teaching phonetics and syntax to kids who wanted to learn Jack Kerouac.  When one of my colleagues asked me what I read for pleasure I said I only read the TV Guide to see what time Star Trek was on.  I forgot to wink; he believed me; I was the talk of the senior common room.

I worked in a pub serving food but my portion control was non-existent and just before the place went bankrupt I was demoted to cleaning.

I worked in the Fine Art and Local History departments of Edinburgh City Library.  That, I loved.  That, I could do.  That, was between university courses.

So giving up a full-time day job in 2000 to try this writing lark wasn't as difficult a decision as it might have been.  I did part-time tutoring to make some money and also had a number in my head: if I ever got an advance of *this* amount, I said to myself, I'd give up even the tutoring and write really full-time.  That took five years and it was scary when it came.

This is year thirteen of writing stories and I feel as if I'm just about to get a day-job again in a funny kind of way, because I'm about to start renting an office in town and going back to having a commute instead of working in my house.  It'll be a big change - no more jammies, no more leftovers for lunch, no more chats with Joe the UPS guy . . .

My one regret is that my office doesn't have a half-window of bumpy glass on which I can put my name in gold paint like Philip Marlowe.  That would have been something.  But learning to smoke those unfiltered cigarettes might have been tough and a raincoat and fedora in this climate would have killed me.

Oh and also:  AS SHE LEFT IT comes out on Saturday.  Yeay! 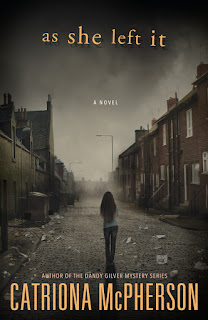