Trouble at the Front

How timely this question is!  I've just hit SEND on the edited draft of THE DAY SHE DIED, my second contemporary stand-alone for Midnight Ink.  It's notable for being the first book that's coming out under my title after a run of five that were changed.

And you know what?  The editor was right and I was wrong every one of those five times.

The last modern one AS SHE LEFT IT started life as OPEN THE DOOR.  Well, actually it started life as FISHBO'S PUFFER.  Neither of my attempts were terrible but ASLI is best. 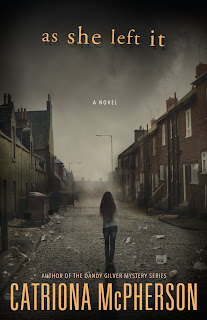 I thought I was going to have two keepers in a row, mind you, because DANDY GILVER AND A REGRETTABLE KETTLE OF HERRING (just submitted) struck me as pure genius, but Editrix Lestrange at my London publisher pointed out that nothing about that title says "crime".  Duh.

A BOTHERSOME NUMBER OF CORPSES began as TROUBLE WITH YOUNG LADIES

AN UNSUITABLE DAY FOR A MURDER was once TROUBLE IN STORE

And DANDY GILVER AND THE PROER TREATMENT OF BLOODSTAINS - a gem of a title - gave me endless gyp along the way.  I called it IN THE DARK.  It's about  a. a coalminer's strike b. buried secrets and c. servant life in the basement of a house.  In the dark x three!  But then Mark Billingham brought out his new book and it was called In The Dark (for no good reason that I could see or at least not for three of them).

So then we called it DEEPEST RED, as in blood and as in the people's flag of the left wingers who wanted the strike to succeed.  I liked it; others thought a quote from a Marxist anthem might not hit the right note. 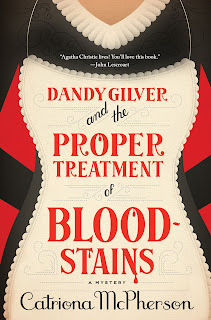 So for a while, just among ourselves, we called it TROUBLE DOWN BELOW.  It started as a joke, but after a while it seemed quite, quite fine.  This is how people manage to be called things like Dr Sprinkle (he works at my local surgery) and Hampton Sublet (A colleague of my husband's) without giggling all day.

So, all in all, I'm very grateful to my editors for thinking up better titles than I do.

My favourite title of recent years?  Hands-down, saw it in the bookshop and bought the book without even looking reading the back jacket copy . . . WITCHES ON THE ROAD TONIGHT.  That it was about depression-era Appalachia, a time and place that fascinate me, was a bonus.  It's still on the TBR pile but every time I see it (while dusting) it makes me happy.
Catriona McPherson at 9:20 PM
Share