A Message from the Mayor

Many of us who blog here belong to writerly organizations (like Crime Writers of Canada, Mystery Writers of America, Crime Writers Association (UK), Sisters in Crime, International Thriller Writers etc.) and some don’t. What benefits do those who belong to such groups feel they derive from their membership, and – for those who don’t belong to any – why have you chosen that route? 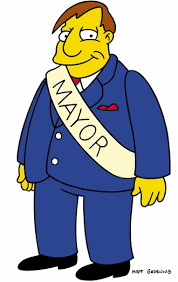 Like most of us crime writers, I am a card-carrying member of Mystery Writers of America, Sisters in Crime, International Thriller Writers, and the like. Those organizations provide an invaluable service to their members. Everything from discounts to advice to mentoring to conferences. For this post, I’d like to concentrate on the writing community when we actually, physically get together. The conventions and conferences.

Fresh in my mind, of course, is Bouchercon, the traveling show that brings together upwards of 2,000 mystery writers and fans each year, which I recently attended in Toronto. Left Coast Crime is another favorite conference of mine. It’s a smaller, more intimate gathering, but so vibrant, informative, and inspirational. ThrillerFest, Malice Domestic, California Crime Writers, Magna Cum Murder, New England Clambake, Murder and Mayhem, Sleuthfest, and Killer Nashville are some of the excellent conferences that take place each year, and that’s just on this side of the Atlantic. Someday I hope to attend Theakston Old Peculier Crime Writing Festival, Killer Women, Bloody Scotland, Norwich, and CrimeFest in the UK. And as a former teacher and of French, I dream of one day of being invited to the Quais du Polar in Lyons. Et pourquoi? Because the crime-writing community has become my home.

In a former life, I worked in academia then in Hollywood postproduction (subtitling and visual effects). And while I loved the work I did in those careers, there was much about the community that didn’t fit my character. I was often unhappy with the politics of the academy and the single-minded goals of profits in the corporate world. All that changed when I walked into my first crime-writers convention in 2013.

Like Dietrich, my introduction to the mystery community came at the Bouchercon in Albany, NY. Some attendees complained—and still do—about various logistical issues with the Albany conference and the city itself, but none of that bothered me. It was the people who made that conference great. My debut novel, STYX & STONE, was still a month away from publication, and, yes, I experienced a vague feeling of alienation that reminded me of my first days at college. I didn’t know anyone, except one person—my dear friend and wonderful writer Lynne Raimondo—from a Facebook group. At dinner, she consoled me over the less-than-glowing review my book had just received by dusting off a few unvarnished words for the reviewer in question. I’ve loved her ever since. So there I was, lost in a strange new place without a book, but I didn’t care. I was armed with some bookmarks that my publisher had provided for promotion! I placed them with great care on the tables set up expressly for that purpose. Later, I learned that this was the quickest and most effective way to dispose of said bookmarks, as no one wanted them and they were swept unceremoniously into a garbage bin at the close of the festivities.

I met some great people in Albany. First, Barry Lancet. Then Michael Sears, Tim O’Mara, Sara J. Henry, and Louise Penny. Great writers all. And my editor, Dan Mayer, invited me to lunch with a couple of other Seventh Street authors, Terry Shames, Mark Pryor, and the above-mentioned Lynne Raimondo. They’ve all remained fast friends. (Well, not Mark Pryor, but the others.) Terry Shames’s A KILLING A COTTON HILL received the Macavity Award in Albany that year for Best First novel, and I was proud to know a winner and call her my friend.
So for me, that’s the best part of our community. The community itself. People often remark that crime writers are among the nicest folks they’ve ever met. Somehow we write about murder and sadness, but remain unspoiled by the exercise. Empathetic and supportive and caring. I can’t say how or why, but it’s true.

Five books later, I’ve since attended four more Bouchercons, five Left Coasts, four ThrillerFests, and two California Crime Writers conferences. I imagine that my flask and I are now familiar sights at these events.
I’ve come to know hundreds of writers and readers and consider them colleagues and friends. In fact, Pinckley Prize and High Plains Book Award-winning writer—and friend—Christine Carbo calls me the mayor. I wear the sash and rosette with pride.