READING If time were no problem, what books (by other people!) would you read again a) from your childhood, b) from your young adult life and c) from the last five years. Why?

Childhood
This is a tough one. So many books that I loved as a child. My mother taught me to read early. Yes, four-year-old Jimmy was a whiz at reading Dick and Jane, Goofus and Gallant, and, of course, Abélard and Héloïse. Oh, wait. That was a little later. But the book I’d like to re-read isn’t actually a book. It’s a poem. “The Highwayman” by Alfred Noyes. Why? Because I loved the mood of the poem, dark and romantic; the repetition and rhythm, like a horse’s gallop; and the fact that my mother read it to me countless times as a bedtime story. If this opening stanza doesn’t grab you, check your pulse.

Young Adulthood
P. G. Wodehouse’s Jeeves and Wooster novels and stories. I’m not sure why I love the upperclass twit Bertie Wooster so much. A few things come to mind about him: his charming buffoonery and innocence; his plain thingness; his constant habit of finding himself engaged to domineering women he doesn’t want to marry; and his ageless, carefree existence as a self-described boulevardier. For me, Bertie provides a respite from a festering world of woe.

Jeeves, of course, is the perfect gentleman’s gentleman. He tolerates his master’s quirks and foibles with characteristic phlegm, appears to bend to his wishes while actually imposing his will on the feckless and clueless Bertram. Bertie and Jeeves make for a timeless pair. And Wodehouse’s precious prose is about the funniest stuff I’ve ever read.

Here’s a little known fact: I name my beloved cats after characters in the Wodehouse novels. There was Gus, Bingo, and Barmy (all passed on). Then Bobbie (after Bobbie Wickham) and Clementina (her younger cousin). We were told, by the way, that our cat Clementina was a female. Turned out to be a male, and his name has morphed to Tinker.
Past Five Years
I re-read Michener’s Tales of the South Pacific several years ago. What makes those stories so powerful for me is the juxtaposition of the everyday, humdrum life of the sailors and nurses against the backdrop of the looming battle for the Pacific. Life on the atoll feels unreal or on hold. Stateside mores are lost in this temporary way station. Normality cannot compete with the fear, loneliness, and empty time of a phony war in an beautiful and enchanting place. Nice American nurses from Little Rock fumble away their chastity to opportunistic officers and fall in love with mysterious Frenchmen. Nice American boys from Philadelphia fraternize with brown-skinned Polynesian girls they can never take home to Mother. Great airfields are built and spies monitor ship enemy movements, as battle plans take shape. Atabrine is everyone’s drink of choice. 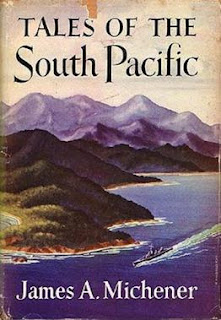 If I have misremembered any details from these beloved books—which is entirely probable—I apologize. It only goes to show that it’s time for me to re-read them.