Write your own review of YOUR last book.

Well, who better to review my book than me. Because no one can be more objective, neutral, fair, honest, trustworthy, impartial, disinterested, unprejudiced (if you want more adjectives than this I’m gonna have to hit the thesaurus) than me? But, as the saying goes, If I am not for myself, who will be for me? If I am not for others, what am I? And if not now, when? I guess the answer to the question of when is now:

And, taking a little liberty here, but not Cinderella liberty, instead of reviewing my last novel to come out, Vortex, I’m going to review my first, White Heat…because it’s being re-released in May by a new publisher (Down & Out) as a precursor to its sequel coming out in the fall. And besides, I have pictures of the new cover so I want to share them


In Paul D. Marks’ explosive new thriller White Heat P.I. Duke Rogers finds himself in a racially charged situation. The case might have to wait... The immediate problem: getting out of South Central Los Angeles in one piece – during the 1992 “Rodney King” riots – and that’s just the beginning of his problems. White Heat begins where the Rodney King Riots leave off.

Duke finds an old “friend” for a client. The client’s “friend,” an up and coming African-American actress, ends up dead. Duke knows his client did it. Feeling guilty, he wants to find the client/killer. He starts his mission by going to the dead actress’ family in South Central L.A. While there the riots ignite.

While Duke tracks down the killer he must also deal with the racism of his partner, Jack, and from Warren, the murder victim’s brother, who is a mirror image of Jack in that department. He must also confront his own possible latent racism – even as he’s in an interracial relationship with the dead woman’s sister.

The novel looks at race and racism from everyone involved, black and white, and no one gets off unscathed.

If there’s a criticism to be had it’s that the subplot of the woman who hires Duke to scare off her stalker could be better integrated into the main plot. But a little birdie spy told me that that issue is taken care of and the subplot is much more integral to the main story in Broken Windows, the sequel to White Heat coming out in Fall 2018, and which follows a similar plot structure,

Here’s what others have said about White Heat:

“...taut crime yarn set in 1992 against the turmoil of the Los Angeles riots that followed the acquittal of the police officers charged with assaulting motorist Rodney King.... the author ably evokes the chaos that erupted after the Rodney King verdict.”
—Publishers Weekly

“WHITE HEAT is a riveting read of mystery, much recommended.”
—Midwest Book Review

“[WHITE HEAT] really caught early 90s LA, in all its sordid glory. And had me turning pages late into the night. I think WH is up there with the best of the LA novels, but has an air of authenticity that many lack.”
—Woody Haut, journalist, author of Neon Noir: Contemporary American Crime Fiction; Pulp Culture: Hardboiled Fiction & the Cold War; Heartbreak and Vine: The Fate of Hardboiled Writers in Hollywood

“A gripping tale of prejudice and deceit, set against the tumultuous backdrop of the 1992 L.A. riots. White Heat is all the title promises it to be.”
—Darrell James, award-winning author of Nazareth Child and Sonora Crossing

“Written in a staccato, noir style as intense as the 1992 LA riots, WHITE HEAT is a stunning debut novel by LA native Paul Marks. It grabs you with the intensity of the riots and keeps the anxiety and tension pushing full-throttle right up to the bittersweet ending. Heat is a hard-hitting, noir detective thriller, that also deals with tough issues like racism, the “diversity” of racism, and the human condition.”
—Andrew McAleer, best-selling author of 101 Habits of Highly Successful Novelists and Fatal Deeds

“I fell in love with Duke, Jack, and Rita. I also loved Teddie, even though we never met her alive.”
—Elizabeth Barone, ElizabethBarone.net

“This book is packed with action, suspense, a dab of humor at times, and basically all the ingredients needed for a great read. I highly recommend it and look forward to the next installment of Duke Rogers.”
—R.J. Parker True Crime Author and Amazon Top 500 Reviewer

“...Marks had me reliving those moments of fear – his details and descriptions made me feel like I was back in LA and it was all happening again... This book comes at a time when racial tensions are once again high in this country – so a reminder of just how terribly things can explode is always welcome.”
—Kat Yares, Amazon Vine Voice


Hang on tight for a white knuckle read!
Paul D. Marks' debut novel White Heat couldn't be better titled, since it burns like a phosphorous bomb, illuminating the mean streets of Los Angeles at a time when they were at their meanest, rawest and most incendiary: during the 1992 riots that tore the city apart after the Rodney King beating verdict. Those of us who lived through that time remember the wounds all too well, and, like the characters in this staggeringly-assured first novel, remain conflicted as to who should actually be blamed for inflicting them. What may be even more remarkable than Marks' evocation of one of LA's most challenging moments is his creation of that rarest of avises, a wholly original P.I. protagonist, in the form of Marion "Duke" Rogers, a former Navy SEAL who struggles to maintain his honor despite a near-crippling guilt complex. If that weren't enough, the author manages to propel his flawed hero into his dangerous, duty-bound quest through one of the most ingenious motives I can remember reading. White Heat is a tough, tersely-written book featuring tough, complicated, and not always lovable characters who might push many readers to the very edge of their comfort zone. But it's honest and it's real, and doesn't it doesn't pander to its audience by providing pat or phony answers to the many complex issues it raises.
—M2

Amazon
Down & Out Books

I’m happy to say that my story “There’s An Alligator in My Purse” has been selected for the 2018 Bouchercon anthology, Sunny Places, Shady People, edited by Greg Herren. It's more off the wall than what I usually do, but I had a hell of a good time doing it. 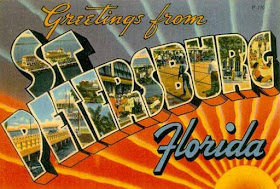