Too Much of a Good Thing

Research is a little like an iceberg. A lot of it doesn’t show. How do you decide how much research to put into your work?

I love the bite of black pepper. But, let’s face it, too much of it will ruin whatever you’re cooking. I feel the same way about historical research in books. Any research, really. Unless the subject is history itself, the fruits of research should be the spice, not the flavor, of the story.

I write the Ellie Stone mysteries, a series set in the early 1960s. That requires a good amount of research. A lot of research. But much of that research is destined to remain below the surface, like an iceberg.


Historical details help set the scene and create a sense of time. They are essential to my stories. But how much of a good thing is too much?

I consider three things when deciding whether or not to include historical detail in my stories: accuracy, measure, and effectiveness

1. ACCURACY
The historical reference must be accurate or, let’s face it, it’s wrong. That doesn’t mean I don’t take liberties with certain details. As the writer, I can blur the focus or omit outright anything I’m not sure of. Imagine my heroine, Ellie, is driving her car and stops to fill up the gas tank. What if I don’t know which oil companies were around at that time? (I do, but let’s say for the sake of an argument that I don’t.) For something as commonplace as filling up, nothing requires me to identify the brand of gasoline or the price per gallon. Unless I want to make it a significant plot point, e.g. the murder took place at the Esso station or Ellie only has enough money for a gallon of gas. But I’d better get some details right. For instance, there was no self-service in 1960, so there must be an attendant to pump the gas and check Ellie’s oil.

Consider these two descriptions.
A.  I pulled into the Esso station, ran over the Milton service gas station signal bell hose,
and stopped in front of the high test pump. Using the dash-mounted gear lever of my 1955 Dodge Royal Lancer, I shifted into park, then I switched off the ignition. Drumming my fingers on the steering wheel, I waited for the attendant.

B. I pulled to a stop at the gas pump and, drumming my fingers on the steering wheel, waited for the attendant to answer the bell.

(I think we’ll all agree that “Milton service gas station signal bell hose and the gear shift information are more than is required. B is better.)

In my research, I may have stumbled over some fascinating information that strikes me as very cool. But that doesn’t mean I should necessarily include it in my book. You can easily bore the reader with too much detail that stinks of research. Everything in good measure. 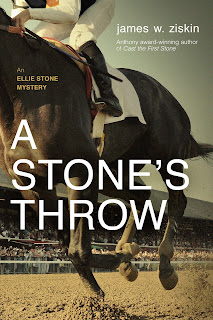 Here’s an example from my upcoming release, A STONE’S THROW (June 5, 2018).
A. The Soviets had launched two different cosmonauts into space twenty-four hours apart. The first one was the third cosmonaut ever in space. The second was the fourth, and they were at that very moment orbiting Earth at the same time.

B. The Soviets had launched two different cosmonauts into space twenty-four hours apart, and they were at that very moment orbiting Earth in something resembling a couple of dented Volkswagens. Putting aside my worries that we would never catch the Russians in the space race, I set about plotting my day.

(Example B sets the period and also shows Ellie reacting to what was news in 1962, all the while continuing with her daily routine. Plus it’s less confusing.)

The reference must be effective.

I sometimes use historical details to create more than just plot points. I can evoke the period in just a word or two. I call these words “madeleines” after the nostalgic triggers in Proust’s Remembrance of Things Past. If my heroine asks the gas station attendant to fill the tank with Ethyl or high test or Good Gulf, the reader will probably know we’re not in 2018 anymore. And older readers might feel immediately transported back in time. That’s gold for a writer of historical fiction.

So don’t forget to spice the dish, but go easy on the pepper. Too much of a good thing is no good at all.