Describe your editing/revision process. How do you make that mess of a first draft into a real book?

My name is Paul and I’m a Pantster. 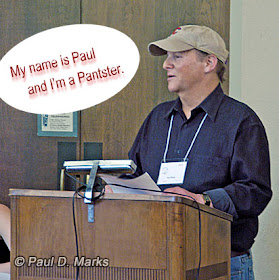 In a word, here’s how I would describe my editing process: messy.

Since I am a pantster I don’t really have much when I start. No outline. Maybe a few notes or some ideas in my head. And I just let the characters “walk and talk” until they get to know each other, and I get to know them. It doesn’t really matter how far flung or bad my early drafts are. I guess in some ways you could say they’re my “outlines”.

The key is to realize that everything isn’t straight from the muse and that you do have to refine and chisel away at it until you come up with something recognizable. You have to work on the characters and the plot and all the other elements. I know I’d prefer never to have to rewrite, but it’s really all about the rewriting, isn’t it?

I read the drafts over and over again, each time chiseling away at them so they become more and more formed with each draft. My early drafts are random and stream of consciousness. Sometimes they run way long, other times they’re way too short. And almost all the time the endings are very sketchy. Those truly get fleshed out more with each subsequent draft.

One of the things that truly does blow me away is just how that hot mess of a first draft (and second draft and third draft) becomes something that actually makes sense and might even be fun to read. I just finished 2 new stories, working on a 3rd, amazing when it all comes together. There’s always that phase around the middle of the writing process where I look at something and it’s just a big mess and I wonder if it’s worth continuing. Most of the time it is. You just have to see the Maltese Falcon under the black paint. It’s usually there, but you have to chip away at the paint ever so gently so you don’t chip the falcon. 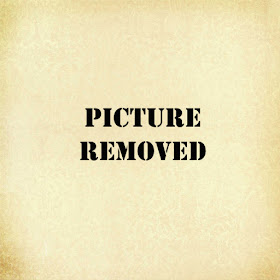 Even the great masters of painting “edited” their work. When some of their paintings are x-rayed they find earlier “drafts” of a work on the canvas, sometimes even different works altogether. So there’s no sin in editing and doing draft upon draft.

I usually go through lots of drafts. Some have major changes. Some have minor. But here’s a hint, don’t edit as I go along. Big things, little things, most of the time I change them in the next draft. I might make a note but I don’t get bogged down in the minutia. For example, if I have someone with blue hair on page 7 and I decide I want them to have green hair throughout, I don’t make that change till the next draft. That’s a small one and a silly one, but it gives you an idea of what I’m talking about. The only real exception in my method is if I decide that something major, plot or character-wise, isn’t working. Then I might toss the draft I’m working on and go to a new one with the new changes. But more often than not, even with big things I just change horses in mid-stream, so to speak, and go back and fix the earlier things in the next draft.

And, though I’d like to think that my drafts are perfect it helps to have a Maxwell Perkins of your own. Perkins was the editor for Hemingway, Fitzgerald, Thomas Wolfe and others. And he helped them whip their manuscripts into shape. Sometimes I feel like I shouldn’t need an editor but we really do. You need someone with a different perspective and who isn’t tied to every golden word you put down on the page. 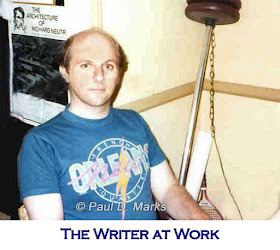 I’m lucky to have my own Max Perkins, my wife Amy, to read my stuff. And sometimes I don’t like it when she tells me she thinks I should change X or Y, but most of the time she’s right and I’ll go back and re-do something. Other times I might argue with her and I’ll end up keeping something and changing something else.

But you have to be careful about who you choose as your editor. You don’t want someone who doesn’t “get” you or who can’t be impartial and just loves every word you put down on paper (i.e. my mom – to whom everything I wrote was just wonderful). It works for Amy and me because she’s not afraid to tell me what she thinks, but we also just work well together, we’re able to hash things out and brainstorm a problem in the manuscript together. For some people, a professional editor is the solution for others a trusted beta-reader. You just need to find what works for you.

Next in the editing process is the almost-endless read-throughs. I’ll read a draft and make notes, then Amy reads it and comments on my notes and we go back and forth that way for several drafts. Finally, we’ll sit down together and read it aloud. It’s amazing to me how so many things will come out when you read out loud. Lines that might have looked fine, sound bad or awkward. Typos that you become “snow-blind” to will become obvious when you’re reading aloud.

At some point the editing has to end. It’s really hard to stop sometimes because you’ll always find more things to polish the more times you read something. But you have to finally finish and let it go. Send it out into the world and hope it can fly on its own.

Check out my Duke Rogers Series: