Monday-Friday Reads (+ the weekend) by Catriona

Just a bit. I post about book mail as I open the parcels, bookshop hauls when I've been on a raid downtown, what I'm reading on #Fridayreads, what I'm going to read on #TBRThursday, and occasionally an actual review. (They're hard).

There are only two "rules". I won't say a bad word about a living writer. And it's always what I happen to be reading, never filtered through what I write. (Although it would be a weird writer who had no crossover at all, I suppose.)

Sometimes I seek help to decide what to read next. Earlier this week the question was: Little Comfort or a bit more comfort? when I was swithering between Edwin Hill's debut and V.M. Burns' latest (except probably not latest, because Valerie makes me look like J.D.Salinger when it comes to output). 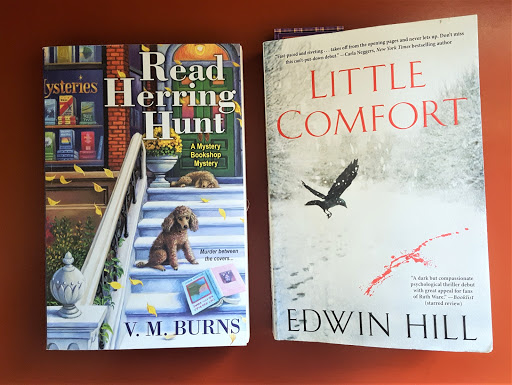 Look closely and you'll see a bookmark, revealing that I plumped for Little Comfort, on the grounds that after a powercut, inside a heatwave, inside a wildfire, inside a pandemic . . . I should save Read Herring Hunt in case things got worse.

Speaking of the fire . . . (we're fine, by the way) . . . I'm already curating my Christmas reading pile: the heap of bankers and treats that are going to see me through the two-weeks on the couch in late December. So far:

My one rule for Christmas used to be "I don't know these people so I don't have to tag them on Twitter them after", and Maggie O'Farrell and Kiley Reid are in that bucket. I've scrapped the rule overall though (I know too many writers) and am hoarding Elly Griffiths and Francine Toon because they're going to be ah-maze-ING.

My TBR at Christmas pile still needs a lot of work. I want some non-fiction, including a celebrity memoir. Last year saw a bumper haul:

Raynor Winn's book was the account of walking the south-west coast path through Somerset, Cornwall, and Devon in England, in response to becoming homeless in middle age. And more Maggie O'Farrell. Plus the latest installment of Paul O'Grady's autiobiography. (I don't care, in case anyone's wondering. The easiest quickfire question in the Bouchercon toastmaster interview I just taped with Jess Lourey was "Name your guilty pleasure". Because I feel no guilt about any pleasure. Bollocks to that.) I was sold on this delight when the first volume came out: it's called At My Mother's Knee, and Other Low Joints. Who could resist it? Also, if Mr O'G was told at any point to be a bit diplomatic about what he wrote, the advice didn't take.

Are you wondering why I said "Speaking of the fire"? The four books in the TBRAC pile are sitting in my study right now. But they spent six days in the car until this morning. When the LNU Complex looked a bit close for comfort, I decided if I was going to have to evacuate and leave my house to its fate, I was cracking into my treats and not saving them.

Yesterday I told my mum that on the phone and she started laughing. When I was four, she reminded me, I decided I was leaving home - too many big bossy sisters, maybe; we couldn't remember - and going along the road to live with my Godmother, Aunty Doreen. And I packed . . . my slippers and some books. Not much has changed. I didn't make it to my aunty's, as it turned out. Because when I mentioned, over my shoulder, that I'd be round for tea on Saturday, my mum said au contraire. You're either out or you're in, was the message.This was a blow. Saturday tea meant sandwiches, scones and cake, in the livingroom, with Dr Who. I gave it some thought, put my slippers on and re-shelved the books. My four-year-old brain wasn't up to arguing that I lived at my mum and dad's house and went to Aunty Doreen's for tea all the time, so what was the problem? Ah well.

Man, this blog has wandered off-topic! Has my reading changed in the pandemic? I'm reading more, and reading more new-to-me stuff after Crowdcast events, or Noirs at Bars. The impetus in hitting the buy button has been to support the indie bookshop, but it hasn't been a sacrifice. I've only given up on one book this entire year and that was one I thought was a dead-cert: set in Edinburgh, in the forties, concerning women learning to run their big houses without maids. (And I'm only saying that much because the writer is dead.)

I suppose I did re-read The Stand, and also: 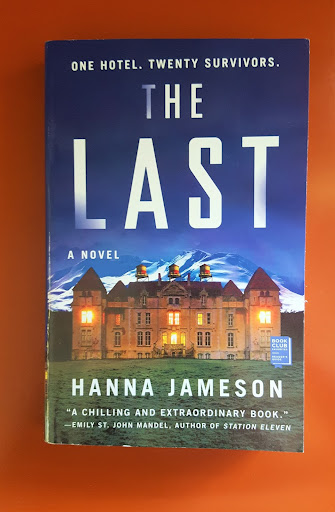 Hanna Jameson's terrific The Last, which is basically The Night Manager meets And Then There Were None meets The Day of The Triffids.

What has had an impact on my reading this year isn't the pandemic, but the murder of George Floyd and the justice-seeking activism that followed (plus the backlash, cherry-picking, trolling, gaslighting, bad-faith claims of innocence and the whole disgraceful mess (I've had it with both-sides-ism. Can you tell?)). Partly to be armed with clear arguments to shovel away muck online, partly to make sure I understood what I thought I did and to learn more, and partly to support the authors and some black-owned bookshops, I've ended up reading this lot:

Austin Channing Brown, Robin D'Angelo, Ibram X Kendi, and Layla Saad have all got urgent things to say to white people (to this one anyway) and I'm glad to have read them. But to finish with an actual recommendation: I still haven't read book on racism in America and beyond that's as powerful and inarguable as Bryan Stevenson's Just Mercy. It sets out the facts and explains the consequences with clarity, boundless courage, admirable toughness, and deep compassion and love for the victims of injustice. 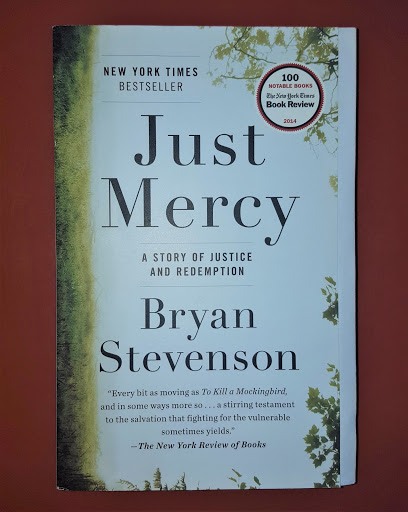