Pitch (im)perfect – This week, you’re pitching the worst idea for a crime, mystery or thriller novel that you can think of – give us your synopsis.

Okay, so there's this ex-cop named Nick Slade who got thrown off the force in disgrace, but we don't know if he did what they say he did or not. Is he clean or dirty, right? You don't know! And he doesn't fight getting thrown off because he figures he deserves it, because the thing they're accusing him of is being responsible for his partner's death. I mean, the guy was twenty minutes from retirement when he died, so it was pretty horrible and sad.

So Nick become a PI, but he doesn't get many cases because he drinks too much and never shaves or bathes but one day this gorgeous, sultry woman with a secret comes into his office and wants to hire him. And instead of being repulsed by his poor hygiene and booze-addled brain, she seems turned on by him. Not only that, but she says she knows who killed his partner! What a good twist, huh? So he takes the case and...

Author's Note: I've written more than thirty novels, most of them crime fiction. From the above partial synopsis, I am guilty of committing the following sins:

1) killing a cop a few months from retirement (it was my first book, so cut me some slack),

2) having a cop leave the force (he resigned) over a terrible mistake (he did it) and having a drinking problem long after, and

3) having a femme fatale very much in the style of Kathleen Turner in Body Heat.

So basically, I may be a cliched mess.

Who came up with this question, anyway?!

A reminder: My novel, CODE FOUR, written with Colin Conway, is out next week on 11/23!

This is the final book in the Charlie-316 arc. 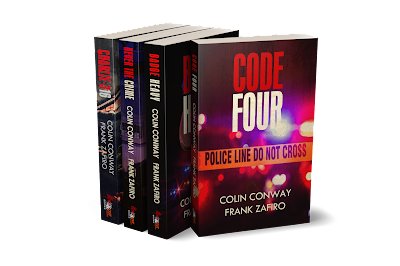 The last two years have been tumultuous ones for the Spokane Police Department. On the surface, the agency has suffered from scandal and police officer deaths. Underneath, a secret and deadly game of cat and mouse has played out.

Now the Department of Justice has sent investigators to determine if federal intervention is needed. Their presence disrupts everyone’s agenda and threatens to expose dark secrets. Goals shift from winning situations to simply surviving.

In this tense and explosive final installment of the Tyler Garrett saga, everyone’s true nature is laid bare. Garrett scrambles to maintain what he has built. Chief Baumgartner tries to protect his department. Captain Farrell’s plans crumble around him, and Officer Ray Zielinski’s career is at risk. Meanwhile, DOJ supervisor Édelie Durand diligently follows the facts where they lead. And through it all, the unflappable Detective Clint keeps his eyes firmly on the prize—Officer Tyler Garrett.