How do you decide who to acknowledge and who to dedicate a book to, and have you ever had an awkward moment in making an “in” or “out” decision?

It might seem a little late, but – since this is my first post of the year – I’m going to take this chance to wish you and yours a healthy and peaceful 2021!

That done, I’ll now confess something: I had to open each book I’ve written to “remind myself” to whom they’d been dedicated! Now that I’ve “refreshed my memory” I’ll share something else with you – I wouldn’t change a single dedication.

I’ve never found it difficult to decide to whom I should dedicate a book, though I admit to some repeat mentions (albeit cryptically…see below).

Like many authors, I suspect, I took the opportunity of my first novel being traditionally published to dedicate the book to EVERYONE I wanted to mention – just in case I never had a second book published!

THE CORPSE WITH THE SILVER TONGUE was the first Cait Morgan Mystery, and it saw the light of day in March 2012. That feels like a long, long time ago (but, there again, a week last Tuesday feels like a long, long time ago, too, so there’s really no telling, these days, is there!?) and, since then, I’ve had another thirteen novels published. I suppose – with hindsight – I could have waited to thank everyone, but hindsight isn’t as useful as foresight, and I’ve never been blessed with much of that!

By the time THE CORPSE WITH THE GOLDEN NOSE was published in 2013 I was Gramma to three, so it seemed only fair to dedicate the book to them. The book is set in British Columbia's wine country, and I wanted to focus on my family in Canada for that book. I remember it was touch and go as to whether grandson #1 (grandchild #3) would get a mention, because he was a bit slow in arriving and his parents were a little unsure about a name...but Trevor made it, by the skin of his then-non-existent teeth.

THE CORPSE WITH THE EMERALD THUMB is set on the Pacific coast of Mexico; I've visited various parts of Jalisco state many, many times with my husband. Puerto Vallarta is smashing, as is Mismaloya, and we once had a long break there in a lovely town called Bucerias (which gets a few mentions in the book, though I created fictional towns and resorts to be able to tell a tale that didn't reflect poorly on real locations/places/people). So why not dedicate the book to the man who saved me from a scorpion in a swimming pool there? True story: my husband dived right in (I'm a Brit, and don't have either an American or Canadian editor looking over my shoulder as I write this blog, so I'll stick with the British English "dived", and eschew the North American "dove" on this occasion, thank you!) and scooped up the scorpion...I was already splashing about at the shallow end. To be honest, I didn't realize at the time how very brave he was being - I stupidly thought a scorpion would drown, but - apparently - they can last up to 48 hours under water, and the pool guy came every day, and I'm pretty sure he'd have scooped it out with the net-thingy if he'd seen it...so I reckon the poor creature was still alive as it was unceremoniously launched into flight over a high stone wall by Brave Hero Husband!

This one is more than a "mere" dedication; I made a conscious decision to name the titular corpse in THE CORPSE WITH THE PLATINUM HAIR after Mum, because...well, it's complicated. The process was something like this: I needed a first name for the "corpse" that would work for a woman born in the early 1940s. Shirley was a good fit; the character's mother's name was Heidi, and she liked the way Shirley Temple played Heidi in the movie, so Shirley it was when she had a daughter in 1942. All well and good, then. However...my mum isn't anything like the Shirley in the book, and it felt a bit weird to keep writing about "her" - but I got over it, because I have honestly rarely thought of my mother as "Shirley"...she's "Mum" and that's that. So, yes, this dedication was an obvious one!

Cait Morgan's quite a lot like me (no, we're not the same as each other, but there are many similarities!) so, when I introduced Cait's sister into this book, you'll understand it was more than likely I'd look to my own sister, Sue, for some inspiration for Cait's sister, Sian. In THE CORPSE WITH THE SAPPHIRE EYES Cait and Bud are due to get married in a fairytale castle on a cliff in Cait's native Wales. Of course Cait's sister flies in from her home in Perth, Australia, for the occasion, but it's not quite the "homecoming" either sister expects! Anyone who follows my sister's blog posts ( CLICK HERE TO REACH FRUSTRATEDNOMAD blog ) knows she's not only nuts about classical music, but also incredibly knowledgeable too, and I'll tell you that it's she who taught me that it's always "yarn" unless you're referring to a specific type of yarn, and introduced me to Ravelry. Thanks, Sis xx 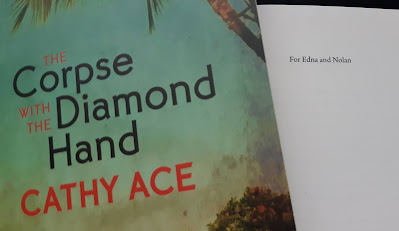 By the time THE CORPSE WITH THE DIAMOND HAND came out I had two more grandchildren, so of course they deserved a mention, and - to be honest - dedicating the book to them and using the acknowledgements to thank the dozens of people I have known on cruise ships, and in Hawaii, who helped with this book allowed me to avoid making any tough choices.

Husband got another dedication in THE CORPSE WITH THE GARNET FACE...because he deserved it! By the time this book was published I was also writing another series for another publisher, and was Chair of Crime Writers of Canada. Writing three books a year is a LOT, and the additional hours each week I dedicated to CWC led to me being strapped for time when it came to me and Husband being together. We got engaged when we were in Amsterdam - it being one of the best places in the world to buy diamonds, of course! - and celebrated there with Dutch friends; I'd spent a great deal of time over the years in Amsterdam (Nissan have their European HQ there, and they were a client of mine, in my previous life as a marketer) and we both had wonderful memories of the city from the 1970s, 1980s, 1990s and then the 2000s...so it was a super spot to cement our commitment to a future together (then we headed to Nice, France, where we celebrated with friends and stayed at the apartment that's the initial crime scene in THE CORPSE WITH THE SILVER TONGUE!).

I didn't expect to have more grandchildren, but when #6 arrived how could I not give him his own dedication? THE CORPSE WITH THE RUBY LIPS features a dysfunctional family; I'm delighted that Oliver was born to the most lovingly-functioning family I've ever known!

I finished this book's editing, and therefore wrote the dedication, in June 2020. Gemma and Kevin had then been allowing Husband and I to stay safe at home for months - delivering groceries, meds etc. etc. to our door, so we didn't have to mix at all - so who on earth else would I dedicate THE CORPSE WITH THE CRYSTAL SKULL to? Husband and I had been on a cruise ship in the Caribbean as I'd been finishing the manuscript - set on the Caribbean island of Jamaica - and I'd been planning to dedicate it to the Jamaicans who'd been helping me with local insights...but, while I mentioned them in the acknowledgements, I had to admit the book would never have seen the light of day had daughter and son-in-law not done what they did for us, so it's for them xx

I'm working on Cait Morgan Mystery #10 right now. It's title is THE CORPSE WITH THE IRON WILL and, while it's NOT a pandemic-set book, the location is (almost literally) in Cait's own back garden, halfway up a remote mountain in British Columbia. The theme revolves around "stewardship", and the filmic influence this time (you know I always have one of those for each book, right?) is "It's A Wonderful Life". I'm really enjoying the characters, and the plot's a doozy...lots and lots of twists and turns! As for the dedication? Hmm...I've got a good idea for that, but it might be more of an "In Memory Of..." than "Dedicated To..." because I'm calling upon the inspiration of real people who have lived in the area, but who aren't around any longer, for this book, as well as insights from those who still live here, and who know a great deal more than I do about things like foraging and beekeeping...but that's more than I should say right now. I promise I'll tell you what I can, when I can (then I'll bang on about the launch date ad nauseum, no doubt!!! LOL!!!).

Want to read the books above, or some of my other works? http://www.cathyace.com/