This week we’re posting our favorite holiday memory. Which led me to think about last year. My least favorite memory of the holidays. We had just moved into our third rental place in the LA area. My sweet dog had just died. 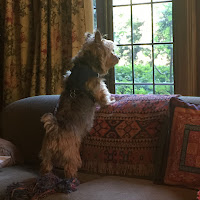 All of our stuff was in storage, so I had to make do with whatever was in the rental, plus what I picked up at garage sales to fill in the gaps. I missed my friends. I desperately missed my house.
I missed my dog. And here’s the thing. I remember absolutely nothing about the holidays. I don’t remember Thanksgiving. I didn’t remember anything about Christmas until I talked to my son who reminded me that we opened gifts and watched a lot of football. After he reminded me, I vaguely remembered playing Trivial Pursuit and being the only person who enjoyed it because I’m the only one who likes games.
So remembering favorite holiday memories from the past is soothing.
Every year we spent at least part of the holidays with grandparents. My mother’s folks had eight kids, and tons of grandkids, so I had barrels of fun with cousins. Mostly I recall us kids being told to GET OUTSIDE and/or STOP SQUALLING (unless there was copious amounts of blood, injuries were ignored). In our young years we were blissfully unaware of the undercurrent of hostility that ran through the festivities. We didn’t know that there were relatives who didn’t speak to each other for years on end. We didn’t know that Christmas gifts were judged harshly. Names were drawn, and you had to buy a gift for the name you drew. Much bitterness ensued. Who cared? We were kids!
One year we kids put on a Christmas play and demanded that the adults watch. All I recall of it is that I was the boss (duh) and there was lots of eye-rolling among the adults, who no doubt had been at the eggnog since lunch.
Christmas celebration at grandparents on my daddy’s side is the source of one of my favorite memories. The ritual was that room containing the Christmas tree and gifts was closed off. Then, after lunch, the door was opened and we all crowded around the tree. That year my sister and I found two doll cradles under the tree, for us. If the scene were in a movie, the cradles would be surrounded by twinkling lights. Since I was the older of the two, I was told I could choose the one I wanted. There was one cradle that I HAD to have. BUT I had been raised to think of my sister’s wants as well. I was in agony. And then my mother, not known for her thoughtfulness, said to me, “Choose the one you really want.” Relieved, I chose the light wood one with curved lines and decals. My sister got the (to me) inferior one, with dark wood with straight lines.
UPDATE: A couple of years ago, my sister and I were reminiscing about Christmases past and I said something about that tough decisions. She burst out laughing and told me she remembered it well, because she remembered being terrified that I might choose the one she liked—the dark one! 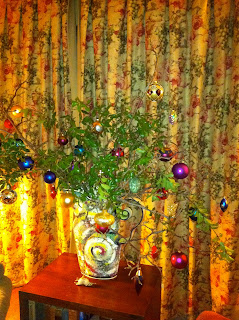 Another fond memory happened on Christmas eve when I was may eleven years old. During dinner, the doorbell rang. My mother went to answer it and we could her exclaiming that she “couldn’t believe it!” We thought maybe friends or relatives had shown up, which made no sense on Christmas eve. But no, my mother had won a train set. She said she had always wanted a train, but as a girl, she never got one, and since she had two daughters she thought that wasn’t the right gift. But some weeks before, she had put her name in a jar for a drawing for a train set, and then forgot about it. She won! Instead of wrapping gifts and getting ready for Christmas with relatives, we spent hours that night playing with the train. I still remember exactly where it was set up and what it looked like.
And finally, one of my favorite memories is the first Christmas I spent away from home. I had just taken a job in Langley, Virginia, and had no money to fly home. A few weeks before Christmas, a friend asked me if I’d like to go to New York with her. Having grown up in a small town in Texas, for me New York City might as well have been on the moon. I said I couldn’t afford it. I didn’t even have a credit card! She said it wouldn’t cost much, that her dad “worked at a hotel in Chicago” and could get us a good rate. I cautiously agreed. We took the train.
I was shocked to find that the "hotel" was The New York Hilton. Our room was a beautiful suite, overlooking the ice-skating rink. There was a huge fruit basket with a fruit cake and wine. I remind you, I was from small-town Texas. I had never been in a hotel, except when I worked at one during college in the summer. I had only stayed in motels; cheap ones. I didn’t know there was such a thing as fruit baskets in hotel suites. I didn’t even know there were suites! I could imagine the cost mounting by the second. And then we were told our room had been “comped.” I had no idea what that meant. My friend explained that her dad who “worked at a hotel” was actually the manager of the Chicago Hilton and that “comped” meant the room was compliments of the New York Hilton manager.
The two-day adventure was a dream. We were all grown up and in New York City. At Christmas. And it snowed.
I hope everyone has a few good memories of holidays—and that we all get to have many more. 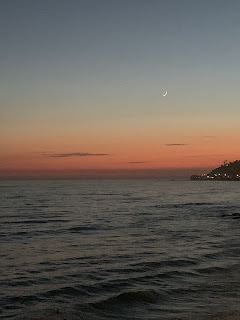