Embarking on a New Adventure from James W. Ziskin

This week we’ve been asked to describe our best holiday memories. But since this is a special week for me, I’m going off script and will write about something else. To wit, my new book, Bombay Monsoon, which hits shelves next Tuesday, December 6.

Styx & Stone was my first novel, published in 2013. It was the debut for my plucky “girl reporter” heroine named Ellie Stone. I wrote her in the first person, a choice that surely surprised some readers. I used to joke that “I’m 6’ 2” tall, weigh 200 pounds, and write like a girl.” I’ve stopped saying that now, because it felt as if I might be minimizing the challenges of writing across gender. There has been a lot of debate about appropriation in recent years, and I certainly recognize the importance of authenticity of voice and experience when it comes to writing characters. I can only hope I’ve overcome any missteps or blunders I made in my Ellie Stone books. My intention was always to write a believable, likable, flawed character, whom I love and respect. Ellie is sharp, tough, small, and fragile. She’s a firecracker and a lightning rod for trouble. She loves to exact revenge—with her wit—on odious male colleagues, people who punch down, and, of course, murderers.

Ellie has now appeared in seven books, and I believe she’s grown a lot from her first adventure in January of 1960. Now a seasoned investigative reporter, Ellie has solved crimes from her adopted home of New Holland, NY, to Los Angeles, to Florence, Italy. With stops in Saratoga Springs and the Adirondack Mountains. She’s been nominated for seventeen major industry awards, and even managed to return home a winner for four of those: an Anthony, a Barry, and two Macavity awards. The success of the Ellie Stone mysteries has been a gift I never would have imagined possible. A gift for which I am eternally grateful.

Did I mention that Ellie Stone is a mid-twenties newspaper reporter in the early 1960s? I did? Splendid! Well, I’m not that. I’m a man of a certain age who has spent a lot of time visiting far-off places around the world. I’ve lived and worked in France for two years. I was director of New York University’s Casa Italiana for five years, and spent months on end in Italy, once even organizing and heading a summer study abroad program in a Florentine villa. I studied French and Italian for more years than I care to count. Hell, I currently teach French in a middle school in Massachusetts. I have a long history of loving languages and living abroad as an expat. Let’s see, what else? Oh, yes…

I call India my second home

Why? Well, for one, I was married there. And, two, I’ve made fifty-six separate trips to India over the past twenty-five years. Three, I lived and worked there for a full year and a half. And, four, my fifty-six business and personal trips add up to nearly four years in country. Most of my time has been in Bangalore, Mumbai (formerly Bombay), and Pune (formerly Poona). (I give those older names because they figure prominently in my new book)

So, finally, I get to the point. I wanted to write a book or two that more closely matches my own real experience. The expat life I’ve led in India inspired the character who narrates Bombay Monsoon, Daniel “Danny” Jacobs. 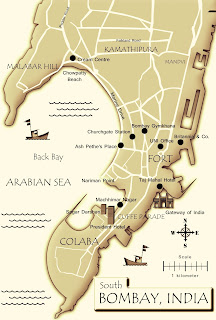 Danny is a young journalist, who, having chronicled the fall of Saigon, is freshly back from Vietnam in 1975. He’s reported on the desaparecidos in Chile as well. But now he’s looking for a new challenge. Something to satisfy his ambitions. To make his mark. An opportunity arises at UNI, United News International, and Danny is off to Bombay, India, for a longterm assignment. But just as he’s settling in to his new life, the prime minister, Indira Gandhi, declares an “Emergency.” It’s a virtual coup. Responding to a court’s decision that invalidated her election victory four years before, Mrs. Gandhi invokes an article of the Indian Constitution that grants her sweeping powers to defend the nation against a “domestic emergency.” She suspends due process and elections, throws her political opponents in jail, and imposes strict censorship of the press.

Danny finds himself in a difficult situation. He’s a foreign journalist, still trying to find his way in a strange country, and nothing he writes passes the censor. What’s he to do?

How about embark on an ill-advised romance with the Indian lover of his expat neighbor, Willy Smets? Sound good? Well, that’s what Danny does.

She’s the young companion of the charismatic Belgian who occupies the penthouse flat in Danny’s South Bombay building. Willy throws elaborate parties, with free-flowing liquor and beautiful women. His soirées are legend among the expatriate community. And when Danny finally gets an invite, he’s immediately smitten by his host’s inscrutable lover, the alluring Sushmita. You’ll have to read the rest to find out what happens. And why Willy and Sushmita might not be who they seem to be.

One of the major social themes I wanted to explore in Bombay Monsoon was colorism. In India, as well as in many countries around the world, the obsession with fairness has been, and continues to be, a horrible prejudice in society. Cosmetics that lighten skin color are a billion-dollar industry. Fair and Lovely is one example today. It works. It lightens skin. But I couldn’t include that product in my book because it was only introduced in 1975—when Bombay Monsoon takes place—but late in the year. So that wasn’t an option for my story. Before Fair and Lovely, however, there was Afghan Snow, a makeup that masked natural skin tone and made it lighter. But only until you washed it off. This bias against natural color is heartbreaking. I knew I had to include it in my story, not to criticize India, but to praise beauty in all its shades, no matter how arbitrary our cultural diktats are.

I love playing with weather in my books and stories, perhaps never more so than in this novel. The monsoon is, after all, a season on the Subcontinent. Like winter and spring and autumn. The monsoon comes in June and retreats in September, but it’s not “summer.” It’s monsoon season. I don’t usually like referring to places or things as “characters” in books, but I might be tempted to change my mind in the case of the monsoon. It’s heavy and onerous and ever-present in Bombay Monsoon, drenching the city and following Danny like a curse. Or a shadow. A companion. Everywhere he goes. I’ve experienced the monsoon in India many times. And I’ve always been grateful to be warm and dry, safe under a good roof. It’s an awesome phenomenon, the monsoon, one that I respect and fear. One underestimates nature at one’s own peril. It’s beautiful to watch the rain pouring down the windows, hissing through the warm air, and drumming on the roof as if it wants to get inside. I love the rain. But I realize it can give and take. The farmers depend on a good monsoon for their crops, their livelihood. The city dwellers, too. For their groceries. But there can be flooding and destruction, too. Not to mention the dangers of driving in powerful rainstorms. 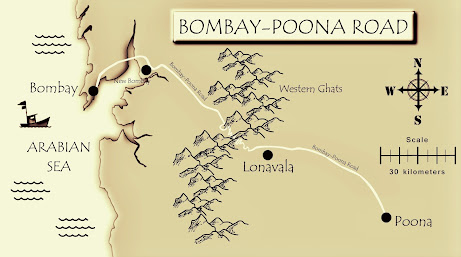 Which brings me to the ghats. The Western Ghats of Maharashtra rise from the coastal plain to the Deccan Plateau. They are beautiful mountains, luscious green in the rainy season, with spontaneous cascades of runoff water roaring down their steep shoulders in ribbons to the valleys below. The roads that climb the ghats are narrow, bumpy, and dangerous. The path switches back and forth, with only the occasional guardrail to protect you from a plunge over the edge to certain doom. Of course today there’s a modern highway that leads up the ghats, safe—relatively speaking—nothing like the terrifying ascent on the old Bombay-Poona Road. I had the “pleasure” of climbing and descending that horrifying road twenty-five years ago. I was sure I’d never make it out alive and, given my acrophobia, pressed myself against the car door and prayed for deliverance until the nightmare ended. It was the most terrifying experience of my life, and I do not lie. That’s why I decided to include it in Bombay Monsoon. I hope it scares you in your reading chair half as much as it scared me in the back seat of that car twenty-five years ago.

And now back to Ellie Stone. I toyed with the idea of making her Danny’s boss back in the New York office of UNI. She would be thirty-nine in 1975, and it would have been fun to play with that idea. But ultimately, I didn’t want to paint Ellie’s future into a corner and decided against it, opting instead for a different female editor, Kate Erving. Kate is also a remarkable journalist, forged from the same iron as Ellie, perhaps. Using Kate as Danny’s boss will allow me more freedom to play with Ellie’s future. Stay tuned.

My elevator pitch for this book is Gatsby meets Graham Greene on the Subcontinent. But it’s also about prejudice, loyalty, love, and threats to democracy. I hope you’ll be intrigued enough to give Bombay Monsoon a try. Maybe for Christmas reading.