Devil in the Details

I used to be a cop. Some of you may know that. And some of you may also be aware of this little known fact - cops are a suspicious lot. No, really, it's true.

So, all sarcasm aside, it baffles me how absolutely trusting and dum-de-dum I've been about contracts for most of my writing career.

Sure, I've perused them. I made sure I wasn't giving away ancillary rights like TV and film, and I paid attention to the reversion of rights, and the length of the contract, and how it might be severed with or without cause. I mean, that's the crux of it, right?

Actually, no. And if you don't believe me, go to a conference. You won't have far to go to find a writer with a contract horror story to tell. And most of them probably start with how trusting they were.

I've been fortunate thus far. Even when business relationships didn't work out, my dealings with the publisher has been cordial. I've tended to come out mostly intact despite several "divorces." But I left some royalties on the table, and things could have gone far, far worse.

If I were smart, I'd learn lessons from my colleagues, or even from some of my literary or musical heroes. I mean, the music industry is flush with stories of young artists signing predatory contracts and then hitting it big and suddenly realizing they don't own their songs and are getting paltry returns. It happened to Springsteen, it happened to Mellencamp.

It didn't happen to me. Maybe the stakes were always low enough? Can't say.

But I can say that I have paid far more attention to my contracts over the past four or five years, and will in the future.

My short story collection, Sugar Got Low was released this month. You can get a digital copy here.

SUGAR GOT LOW contains a tale of grifters, a prequel story to the well-regarded Ania series, several trips back to River City and one to La Sombra, Texas. Enjoy a Walter Mitty homage set in San Francisco and a deadly day in Roman Britain, the heartbreaking story of a junkie and the suspenseful one of a murderer in a black car. And at the end of it all, you’ll experience the dark but inspiring title story of perseverance that was only made possible because of a misunderstood lyric. 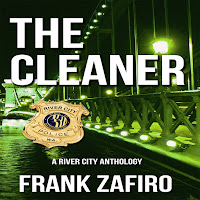 Four-time Derringer finalist Frank Zafiro weaves a lucky thirteen tales drawn from throughout his career with one thing in common – characters you may love or hate, but will certainly feel.

Also, if you dig audio, I released my short collection, The Cleaner in that format about a month ago. I took the daring (perhaps foolish) route of producing and narrating it myself. Is it any good? You can be the judge.

My wife, Kristi helped me out by narrating a pair of flash fiction stories that are included, though, so it can't be all bad.

Except for the fact that she worked without a contract...