Ah…contracts. Every author’s favorite topic, yes? Probably not. It’s what we dream of as an unpublished author – the day The Contract arrives in the mail and you know you’re on the road to being a multi-millionaire best-seller.
Okay, moving on…

Like most authors, I’ll never forget the day my first contract arrived in the snail-mail. It was May 11th 2011. I remember this because it would have been my late father’s 84th birthday, and he would have been so proud. As it was, it was Mum who glowed with pride, and wept a bucket of tears that day, along with me and my sister, because we were all happy, but all missed Dad’s presence as a part of that overall experience. At the time I didn’t have an agent, so, of course, the question was…what should I do about the contract’s content – should I just sign it as it was and be happy about it, or not?

Luckily for me I live in “Hollywood North” (ie: near Vancouver, BC) so we have a lot of entertainment lawyers in the area; I got in touch with one who was recommended to me because he had experience in authorial matters, and I paid him a one-off fee to look over the contract and advise me on its content, because I didn't know what I didn't know! I made certain points about it (eg: there was a clause that said I would give first-refusal rights to the publisher for my next novel, but I didn’t want to do that, so they removed that clause etc. etc.) and he made certain observations, until we ended up with a form of words I could live with, and the publisher agreed.

After writing four books for that publisher in the Cait Morgan series I managed to find myself an agent, who then negotiated my contract with the publishers of my WISE Enquiries Agency Mysteries. By this time I was more confident, and was able to say up-front what I would and wouldn’t be happy to sign, and the contract process moved swiftly. But (yes, there’s often a “but” with these tales!) the publisher was purchased by a bigger house and came up with a new standard contract – and I wasn’t at all happy with it. Now, to be fair, most publishers have what they call a “boilerplate” contract, which the agent, their author and the publisher then use as the basis for negotiations. In this new boilerplate, the publisher was asking for the rights to my work up to term of copyright (70 years after my death…this is a UK company) not the 10 year license they had in the original contract, and they wanted mass-market rights too, but with no bigger advance. I wasn’t happy to sign that contract. My agent said I should. I fired my agent, and walked away from the publisher by not signing the contract.

Since then, I have set up a corporation to all publishing for myself, and that’s going really rather well. The contracts I sign now are with editors, photographers (for cover art), and distributors/sellers both online and for print.

However, I have recently signed contracts for TV options for the standalone The Wrong Boy, and for the Cait Morgan Mysteries: the company with whom I signed provided me with a draft contract which I again had checked over one a one-off basis, and the terms were then repeated for the second deal. To date (and given the lack of any real movement on this front due to the pandemic) I am happy with the amount of creative/directional/casting input I have for these projects and am very much enjoying learning about the roles people play in this “new universe”. I dare say it’ll be many years before I find out if I left anything on the table in this arena, but I think we’re good! 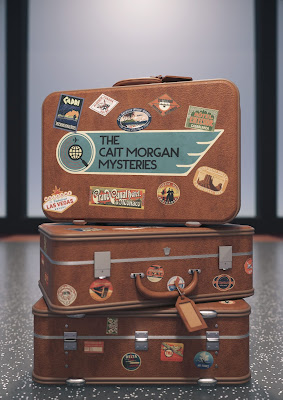