I was the future once

I must say, I love this week’s question. A lot of the time it’s too easy just to keep looking forward, blinkers on, peering towards some distant point on the horizon, assuming that when you reach it, then and only then will you be a success. This week’s question, well it forces me to take stock.

My first novel, A Rising Man, was published in 2016. It’s 2021 now, and my fifth novel, The Shadows of Men is out in a few months. Five years; five novels. And yet it’s been so much more than that. It’s been a journey that’s changed my life. Five years ago I was an accountant who was pretending to be a writer. Today…well I still have trouble calling myself a writer, but I’m getting more comfortable with it. At least I’ve stopped calling myself an accountant.

The thing I remember most about the launch of that first novel is thinking that all I was experiencing – the publicity, the reviews, the sales, the nominations and awards – well that was all normal. I assumed there’d be the same media interest with subsequent books. As a result, I don’t think I appreciated it as much as I should have. Don’t get me wrong, I was amazed and thrilled that people were actually interested in my writing, but with all the events and festivals and interviews, I don’t think I took the time to stop and appreciate just how fortunate I was, and to just enjoy the moment.

Before long, my second book, A Necessary Evil, was published but this time with much less fanfare. Of course that was fair enough. There was a whole new crop of debut authors coming along, each of them younger, better looking and, worst of all, more talented than I was, and they all deserved their time in the spotlight. As for that second book, the reviews were still good, the awards still came, but there was less press and publicity and the sales were down.

All told, they were about half those of the first book.  This worried me. I didn’t feel the book was any worse than the first one – in fact I thought it was slightly less bad. So why were the sales dropping? I asked my agent, a man called Sam Copeland, the smartest, funniest, handsomest man in publishing*, and he told me not to worry…well not to worry just yet. He told me it was pretty normal for sales of a second novel to be well down on the first one, especially in a series. The real test was what would happen with book three. If it continued the downward trajectory, then it might be time to think about writing something else.

So I kept going. I wrote that third book, and it was the first book I’d written that I actually felt good about. Smoke and Ashes came out in the summer of 2018 to good reviews and strong hardback sales. The test though would be paperback and e-book volumes. I worried about it all through the winter and into the early spring of 2019. But I also started to do something about it too. I became more proactive – working the contacts I’d made in the press and the book industry, reaching out to stores and festivals – and then D-day came: the paperback launch. Waterstones, the Barnes and Noble of the UK, chose it as their Thriller of the Month, which meant it was displayed prominently in all of their shop windows throughout the country. This had an amazing impact. After two months, like for like sales were way ahead of what they’d been for book 2. Indeed, total sales were already catching up with those of the previous book. Something else was happening too. Sales of A Rising Man, the first in the series, had stopped declining and had begun to rise again. It seemed many of the people who’d read Smoke and Ashes were now going back to the start of the series and reading the others.

My relief was palpable. Sales of the series were firming up. There was now a sizeable readership who’d taken my characters Sam Wyndham, Suren Banerjee and Annie Grant to their hearts. They were buying each book in the series. At the same time, new readers were discovering the books. As an accountant, I was starting to see trends. About 50% to 60% of new readers of A Rising Man were going on to read other books in the series. If they bought books one and two, it looked like there was over a 90% chance that they’d go on to buy the other books in the series too. We seemed to be reaching a level where the series was sustainable. My publishers saw the pattern too and backed me with bigger advances and bigger marketing budgets. The launch of book four in the series, Death in the East, in November 2019 was accompanied by my first book tour, and hardback sales were the highest of any of the books to date. Then came COVID, which put a stop to most of the marketing plans for the paperback, but sales were still strong. It’ll be interesting to see what happens with the launch of the new one in November. 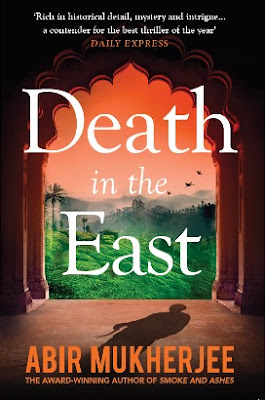 So looking back, what are the lessons I’ve learned? Firstly, like my colleagues from earlier this week, I’ve learned that the key is to keep going. There’s no time to rest on your laurels; just keep your head down and get on with the next one.

The second is that publishing is a fickle business, and so much of it is dictated by luck. If Waterstones hadn’t chosen Smoke and Ashes as their thriller of the month, who knows what might have happened to sales of the series? Maybe that downward trajectory would have continued and I’d have been forced to write something else. But luck is often the result of hard work (not mine though!). I was fortunate in that I had a brilliant team at my publishers who not only honed the book, selected the right artwork, provided targeted publicity and crucially had the right relationships with Waterstones and other retailers.

As it stands, the series is on a firm footing and readership is growing. That’s allowed me to step back from my day job and focus on writing. As Terry wrote on Tuesday, there’s pressure now for a break-out novel and so, for the first time, I’m writing a standalone. It’s a very different beast and writing it feels in many ways like going back to square one and re-learning how to write. It’s a challenge, but a good one.

And so, here we are: five years on and with the scars to prove it. I’m not the future anymore. I’m not sure I ever really was, but I’ve found my footing. With the help and guidance of so many good people and the love of the wonderful readers, I’m building a career which I hope will be sustainable enough to provide a living for me and my family. And in the end, what more could I ask from being allowed to follow my dream.

Have a great weekend.

*I am contractually obliged to write that. It saves me 2% on his fees. Seems worth it.