When the Bloom is off the Rose from James W. Ziskin

With me, it wasn’t exactly like that. Sure, I was buzzing when Styx & Stone came out in October 2013, but no one else was. I’m not complaining. I was thrilled that I’d finally found a publisher to pay me to publish my book. God knows I’d been wanting that for so long—since my tender youth, what the French call ma première jeunesse. I’ve probably mentioned it here many times that, for too long, I was not ready to be a writer. I lacked the experience, or at least the maturity, to write anything of substance. I needed to work on my words as well as my ideas. And so, as with many of our writing journeys, mine neither came early, nor did it produce a blockbuster best seller when I finally broke through.

I’d dreamt of being a writer since I was a kid. I even wrote an awful historical novel set in World War I when I was twelve years old. Written on a blue portable Royal typewriter late at night, my first novel was a waste of 200 perfectly fine sheets of paper. And I wrote five more bad books over the next fifteen years before I got sidetracked by life and career and didn’t write for another fifteen years or so. But eventually I came to the realization that my lifelong dream of writing was slipping away. I had to get to it or let it go. And that wasn’t going to happen.

So I started writing again. And after a year and a half I had a book that wasn’t so bad. I polished it and reworked it and finally started querying agents. It took a while—probably another year and a half or two years, but the e-mail finally came. I had an agent. It was 2009, and I was sure publishing stardom was just ahead.

That book never sold. But I wrote another in the meantime. That book was Styx & Stone.

My agent began shopping it around, but there were no takers at first. In fact, two years went by with nothing but “declinations,” as my agent called them. Then one Friday afternoon in November 2012, he sent me a cryptic e-mail, informing me that a publisher had showed “preliminary interest.” I was living in California then, and by the time I’d opened the e-mail, my agent had gone home for the weekend. I was left to wonder what the hell “preliminary interest” meant until Monday. It was a torturous wait.

When he finally got back to me on Monday, he clarified that there was an offer. I was ecstatic. An indescribable emotion after forty years of longing.

The book got some good reviews before it was released, and I looked forward to my wildly successful and rewarding career as a celebrated novelist.

The launch day finally arrived. October 13, 2013. Nothing could spoil that moment for me. The buzz was coming. My book was going to be the next hot new thing. And on that wonderful day of realization of my dream, I awoke to a vicious review of Styx & Stone in the New York Journal of Books. It was personal and it was mean.

My book was not going to be the “next hot new thing.”

I can’t tell you how much that review stung. But, funny thing… For me, things got better with each successive book. My second Ellie Stone mystery, No Stone Unturned, was a finalist for the Anthony Award. The third, Stone Cold Dead, made the short list for the Anthony, Barry, and Lefty awards. And my fourth, Heart of Stone, actually won Anthony and Macavity awards and was nominated for an Edgar. 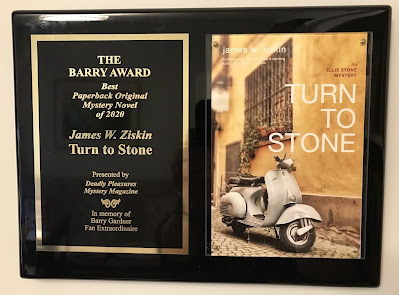 I’ve been extremely fortunate to have been recognized over the years by readers and juries. This year, in fact, has been the best of them all. My seventh Ellie Stone mystery, Turn to Stone, made four short lists and won two of them, the Barry and Macavity awards. And if that were not enough, my short story, “The Twenty-Five-Year Engagement” also was nominated for four prestigious awards this year: the Edgar, Agatha, Anthony, and Macavity. Let’s not quibble that it didn’t take home any of those prizes; it was a gigantic thrill to be a finalist for them.

Okay, enough bragging. The reason I mentioned these awards and nominations is because we must never lose hope after the shine fades on the first book. We have to keep plugging away. I waited forty years just to get published, after all. I am grateful and surprised by any success I’ve had since that first book, Styx & Stone.

And I’ll tell you this. The sting of that first horrible review has lost it power over me. Due to time, yes. But also thanks to the success my subsequent books have enjoyed. Those books have truly been the best answer to that mean-spirited review.