The Minds were queried to give their recommendations for gift ideas. I dread lists because there’s the inevitable, “What about…?” where the ellipsis and trailing voice seems like an indictment. Therefore, I hereby waive my Fifth Amendment right. I enter the graphic as Evidence. A picture may say a lot but it’s also a good shopping list.

An authorial advantage and privilege is knowing other authors and having the opportunity to read WIPs or get your mitts on ARCs. Such was the case with my entries from Edwin Hill, James Ziskin, and one of the two entries from Colleen Cambridge. 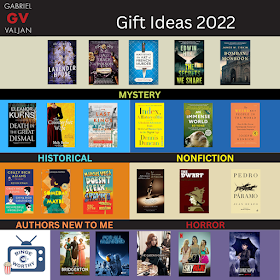 Colleen Cambridge (aka Colleen Gleason) is an author whose work I’ve enjoyed for years. She has mastered multiple genres. She makes me laugh, and she is prolific. Edwin Hill and fellow Criminal Mind James W. Ziskin are on this list because I respect writers who take artistic chances. Edwin stepped away from his Hester Thursby series, Jim from his Ellie Stone, to write thrillers. The Secrets We Share juggles POV and timelines. Bombay Monsoon introduces history that most readers don’t know but should, since the coup d’état in India in 1975 in the background to the story brings a cautionary lesson of just how fragile democracy is to the foreground.

I loved Lev ACRosen’s Lavender House, which I won in a Giveaway at First Chapter Fun with Hank Phillippi Ryan and Hannah Mary McKinnon. Lavender House is a noir mystery, with an LGBT twist on all the familiar tropes I enjoy in detective fiction.

I’m a sucker for anything about the Revolutionary War. You can’t go wrong with Mally Becker’s second outing with her widow Becca Parcell and former printer Daniel Alloway. Eleanor Kuhns immerses readers in a tense murder mystery that invokes forgotten history. All I will say is that the state of Maine had outlawed slavery, Virginia had not, and the swamp in the title is Purgatory.

I’d written two unpublished mysteries set in 1930s Shanghai when Jonathan Kaufman’s The Last Kings of Shanghai appeared and sent me back to the manuscripts. The history of Shanghai is an object lesson in class, colonialism, and why I’ve argued for years that World War II started in the East and not in Europe.

Nonfiction is my palate cleanser. Dennis Duncan’s Index is a book nerd’s Nirvana. I love animals, and Ed Yong’s An Immense World is a treasure trove of facts and a dose of humility. I can’t reduce Joseph Heinrich’s Weirdest People to one sentence. It’s about how things work and why we think the way we do, explained from multiple angles.

There are (technically) five books under Authors New to Me. Crazy Rich Asians has been adapted for the screen, and was a great movie, but we know that the book is almost always better than the series. Kevin Kwan’s trilogy ventures deeper in personalities and family dynamics than what could fit on the screen. Someday, Maybe is a debut that will leave you on the ropes. MarcusVega Doesn’t Speak Spanish, but he’s on a quest to learn more about his father and discovers so much while he visits Puerto Rico.

While I prefer horror that is psychological, each of these three stories left me changed emotionally. Both Pinocchio and Pedro Páramo are hallucinatory and disquieting texts and will leave you unnerved. I highly recommend the Perella translation because it offers the unabridged text from Carlo Collodi, and it includes drawings from the original illustrator, Enrico Mazzanti. With Pedro Páramo, even if you don’t know Spanish, listen to the hypnotic cadences of the original text on YouTube and do yourself a favor and find Rulfo’s photographs of desert landscapes online. Juan Rulfo wrote two books, and Gabriel García Márquez hailed Pedro Páramo as “the most important, the most beautiful novel ever written in Spanish. If I had written [it] I would never worry or write again in my life.” Márquez memorized Pedro and it inspired Gabo’s One Hundred Years of Solitude.

If Machiavelli’s The Prince were an allegory, it would be Pär Lagerkvist’s The Dwarf, a text filled with monstrous ambition, and a character so evil, so sinister that Piccoline, the eponymous dwarf, makes Ahab and Iago seem like choirboys who couldn’t hold a note.

When your eyes grow tired from reading, Binge! Wednesday landed last week, and it won me over with its dark humor and literary references. For All Mankind is for fans of sci-fi and alt-history. Walter Tevis, author of The Queen’s Gambit, was the John Cazale (Fredo in The Godfather) of literature. Every novel Walter wrote was literary gold. Sky Rojo is a Spanish Thelma & Louise, but darker, and its rich with accents and vocabulary from all around the Spanish-speaking world.