My Favourite (six) Holiday(s and counting), by Catriona

I know this is A. last week's question and B. Susan's day but I'm tagging on for a very particular reason. I've got a book coming out tomorrow. What's that, you say? In a group blog with ten authors, someone's always got a book coming out? Fair point but the thing is that all five-and-I'm-writing-the-sixth in the series open on a holiday. Sort of. 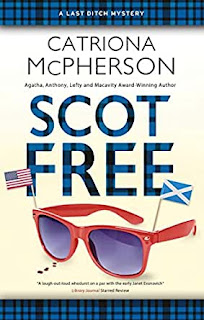 SCOT FREE kicks off as fish-out-water Scot, Leagsaidh (pronounced Lexy) Campbell, is cowering in her office - she's a marriage and family therapist - as the 4th of July fireworks light up the sky and terrify all dogs and any humans who're scared of explosions. The short marriage that brought her to California is over and her only remaining client, Mrs Bombarro, is just about to be arrested for killing Mr Bombarro, the owner of a fireworks empire. Nothing goes BOOM like Bombarro! Literally. 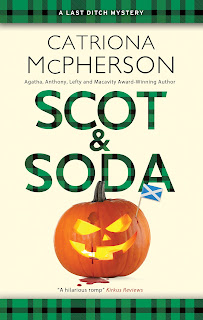 Three months later, in SCOT AND SODA, Lexy is having a Halloween party onboard her new home, moored in the slough that gives the Last Ditch Motel its branding disaaster of a name, declaring that she never wants to see another dead body in her life, trying to tug up the case of beer she sank in the slough to keep it cool, and wondering if the rope is caught on something. Guess. What. Happens. 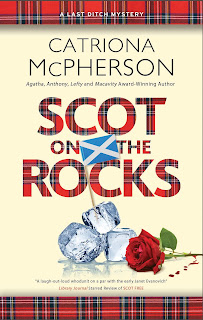 By February, Lexy has just about resigned herself to being the only singleton at the loved-up Last Ditch, but Valentine's Day, US-style, is a lot to take and so she's on her way home with two Chinese take-out meals because it was too embarrassing to buy one this night of all night, when once again she meets trouble, in SCOT ON THE ROCKS. 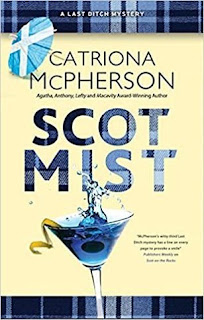 Then something happened. All over the world, in every country, life stopped except for essential workers, emergency services and, of course, healthcare professionals. For writers, expecially comic crime writers, the task of getting the next book out of our heads and into the bookshops was a peculiar one. It took us all differently. Me? I made lemonade. In SCOT MIST, I put the Last Ditchers into lockdown at the motel and wrote my first-ever closed circle mystery. It opened not on any holiday, but on an anti-holiday: Friday the 13th of March, 2020, the day they closed Disneyland. Normal service resumed for the next book, this book, SCOT IN A  TRAP, the one that comes out tomorrow! It's nine months later and Thanksgiving is straining the belts and the tempers of the Last Ditch residents, as a figure from Lexy's past materialises at the motel. Dead. Awkward, right? Also, no spoilers, but it's significant that Thanksgiving comes nine months after the start of the lockdown. It's not only Thanksgving; it's also someone's birthday . . . 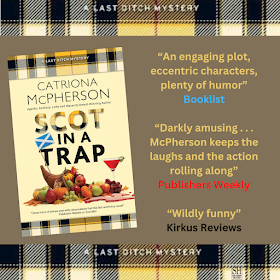 And now I'm writing the sixth book, HOPSCOT, which is more about the holiday it's about than any of the others have been. It's about my favourite holiday of all - Christmas - and, in it, Lexy goes home to Scotland for a freezing cold family get-together, taking the entire Last Ditch contingent with her. I'm having more fun than seems reasonable, considering this is my job, and it's taken over my brain so much that when I was laying in refreshements for the launch party for SCOT IN A TRAP, the California Thanksgiving book, I bought a big tin of Quality Street, an iconic* Bristish Christmas confectionery. But be honest: who wants more pumpkin-spice snacks once December has begun? Exactly. 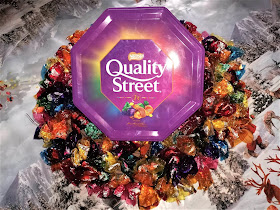 * Seriously iconic - that is a wreath of Quality Street wrappers, made by my friend Michael, crafty spouse of fellow writer Laura Jensen Walker.