Happy Thanksgiving or Random Thursday (depending), by Catriona 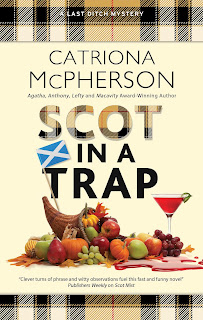 It just so happens that my new book - out next week, details here - is set at this time of year. It opens on Thanksgiving morning in the owners' flat at the Last Ditch Motel, where fish-out-of-water Scot, Lexy Campbell has just committed the sin of suggesting she cut up some fruit in case anyone feels like something fresh for dessert . . .

"Purely because, on the many surfaces around the kitchen there were: a vat of Mexican wedding soup big enough to drown the entire bridal party except that it was so thick everyone could walk across it to the edge of the pot even in stilettoes; two commercial (surely) bakers’ trays of rolls that smelled like cakes and definitely had sugar on the top: three washing-up-basin-sized bowls of alleged mashed potato which were actually cream and melted butter held together with just enough potato starch to mean you’d need a spoon to serve them rather than a jug with a spout; three similarly-sized bowls of mashed yams reeking of what I hoped was nutmeg but feared was cinnamon and topped with full-sized burnt marshmallows i.e. not the dinky ones from cups of cocoa but ones you’d have to bite in half or risk needing a Heimlich if you tried to breathe while chewing; a casserole dish (apparently – my first guess had been paddling pool) of stuffing (apparently – my first guess, having seen the cranberries, walnuts, and orange peel, had been cake-mix); a wheelbarrow without its wheels (Noleen called it a bowl, but seriously) of pure, cheese-topped, butter-slicked extra-thick cream which allegedly had vegetables in it (onions and green beans if you were gullible enough to believe that); five shoe-box-sized tureens full of jam I was supposed to call sauce; and of course a mysterious object roughly the size of a suitcase you'd never be allowed to carry on, which was probably a turkey but couldn’t be identified since every square inch of it was wrapped in bacon and smelled only of maple syrup from the cake crumbs (supposedly breadcrumbs, but I’ve watched every episode of bread week in that tent and this was cake) bursting out of it at both ends like a baking soda volcano.

So it seemed to me that, if we were going to start with sliceable soup and carry on to whole cakes, crumbled cakes, cheese, butter, cream, marshmallows, jam and maple syrup with some meat and veg thrown on as a kind of garnish, maybe we needed to finish with an alternative to the five pies that were perched all around: on the breakfast bar; on both bar stools; in a trio on the windowsill, on the- Hang on, that’s six. Wait. Pumpkin pie on the breakfast bar, two pecan pies on the stools, a cherry lattice, a chocolate cream and a key lime on the windowsill. Yes, six. No - plus an apple cobbler on top of the microwave. As I was saying, it seemed to me that maybe we needed a lighter alternative to seve- Eight! There was a cheesecake in the dishrack – alternative to eight – Nine! I had just spotted a peach flan by the coffeemaker – alternative to nine pies for pudding."

US pals: I channeled my first impressions from way back in 2010 for this jaded view of tonight's dinner; I'm acclimatised to it now. International pals: I'm not even kidding.
Happy Day, whatever day it is where you are,
Cx
Catriona McPherson at 12:30 AM
Share